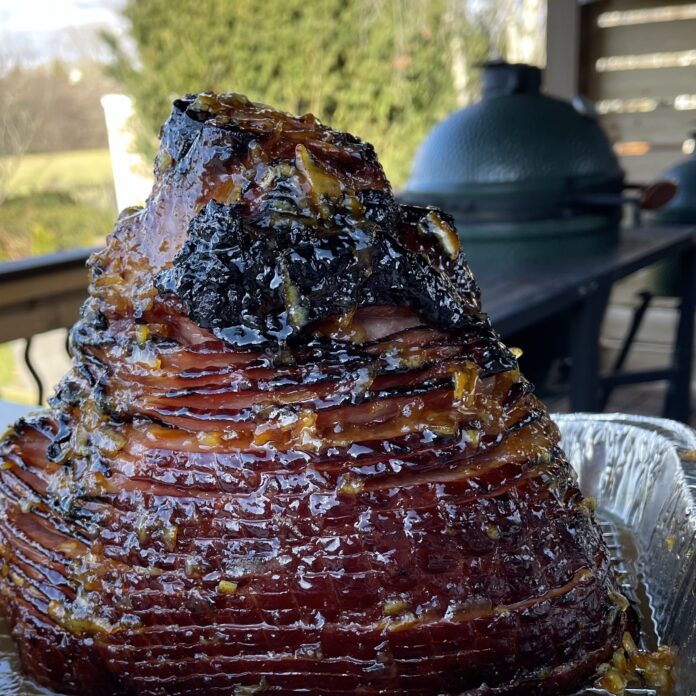 Nothing screams holidays more than Ham.  I’ve never been a big fan of this protein until I started testing and making my own recipes.  And let me tell you, this orange marmalade ham is out of this world.  The tenderness of the ham with with the crispy edges covered in this deliciously sweet and sticky glaze will be the perfect centerpiece for your next holiday gathering.

Prep and Grill the Ham 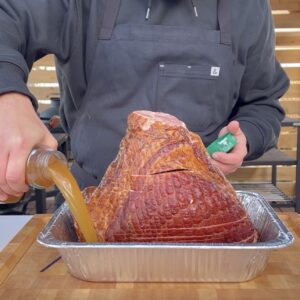 Remove the ham out of the packaging and place it onto a wire rack inside a foil pan.  The reason for the wire rack is to allow air to flow around the ham and allow the rendered juices to drip without making the bottom soggy. The secret to the tenderness and juiciness of this ham is the apple juice. As the ham cooks on the grill, the tartness of the juice start to evaporate and infuse into the meat creating a succulent dish.

Preheat your grill to 300 degrees for indirect heat. Total cook time will depend on the size of the ham, but should take about 2.5 hours or until the internal temperature of the ham reaches 150 degrees and the edges start to crips up.

How to make homemade marmalade sauce.

This sweet and spicy sauce is what made this dish for me.  It has the perfect balance of sugar and holiday spice in a caramelized sticky glaze. 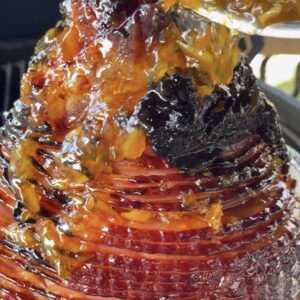 In a sauce pan, add a jar of your choice or marmalade and half a cup of rum.  Simmer over low-med heat making sure to continuously whisk as the sauce thickens. This spiked sauce will fill the kitchen with island holiday vibes that will set the mood for a joyful holiday!

Please note: the alcohol content will cook off while on simmer making it safe to consume by children.

While the ham is still on the grill, pour this amazingly aromatic glaze over the meat and let it caramelize over the edges.

Carve and serve this delicious orange marmalade ham to family and friends.  Enjoy!

Check out the Recipes Page for other tasty ideas! 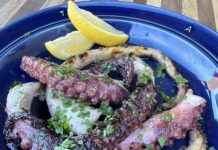 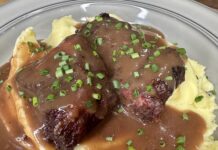 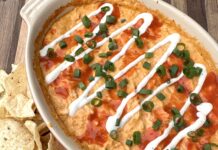 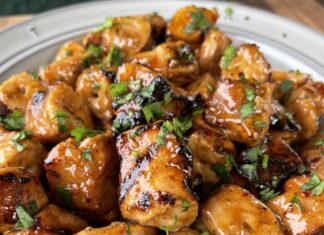 November 20, 2022
0
These cajun honey pork bites are the perfect quick solution for a delicious party snack or weeknight dinner.  The richness of the buttery sauce...