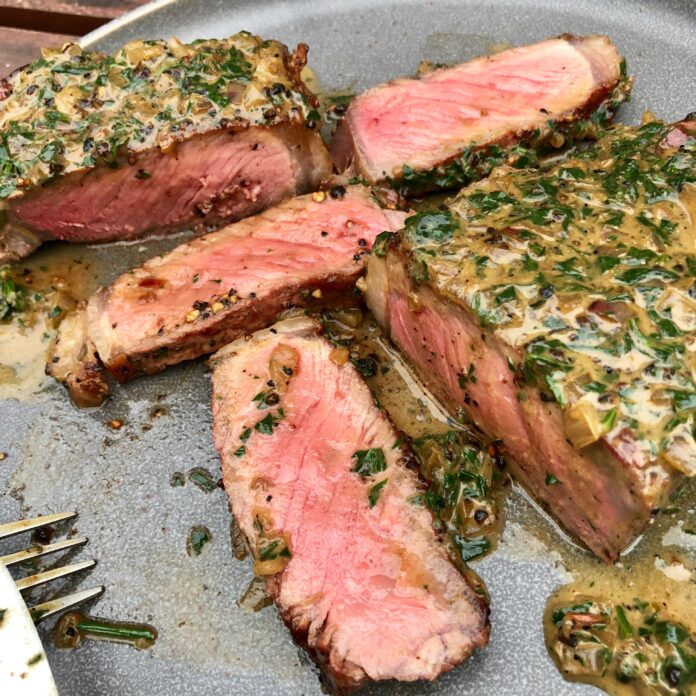 A Prime NY Strip steak with a peppery crust AND a delicious sauce? Sign me up! Also known as Au Poivre, the pepper crusted steak is mellowed out by the creaminess of the sauce. It makes for a tasty combination. And it’s easy to make!

Let’s prep it up 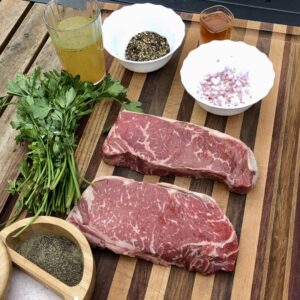 In addition to the peppercorns, you will need kosher salt, parsley, shallots, beef broth, brandy and heavy cream.

Start by patting the steaks dry and seasoning both sides with the kosher salt and LOT of the fresh cracked peppercorns. Since these are pepper steaks, you want a nice layer of pepper.

We’ll get to the other ingredients later as they will be used to make the sauce.

We’ll be cooking these in a cast iron skillet to an AWESOME crust on it AND to then use the same skillet to make our sauce.

Crank up the grill to high and get that cast iron smoking hot. That’s how we will get the crust we’re looking for. Put 1 tbsp of olive oil in the skillet, swirl it around and put the steaks in. DONT’ TOUCH THEM. Let them sit and sear for about 3 minutes. After 3 minutes, flip them over and sear the other side. After the next 3 minutes, flip the steaks again and NOW check the internal temperature.

If you want the perfect steak you need to cook to temperature. I like using the Thermoworks Thermapen Mk4. It’s fast and very accurate. For a medium rare steak, pull it off between 125-130 degrees. Keep flipping the steak every 3 minutes and checking the internal after every flip. Depending on the thickness of your steaks, you’re looking at cook time of anywhere between 6 and 12 minutes.

Pull the steak from the skillet and set it aside to rest. I like to rest them at room temperature, loosely covered with aluminum foil.

Time for the sauce

We’ll be using the same skillet we used for the steak to make the sauce. We want all those tasty burnt bits on the bottom of that skillet to add flavor to the sauce.

Start by adding 1 tbsp of beef stock to the skillet and scrape the bottom with a metal spatula to get all the burnt bits off. Next add the shallots and saute them for a few minutes, until soft.

Add the rest of the beef stock, brandy and simmer until reduced by half. Then add the heavy cream and season with a pinch of salt and pepper, to taste. Cook until the sauce is thickens but is still liquidy. Add the chopped parsley at the end and stir it in. And now remove the skillet from the sauce.

Let’s put it together

The moment we’ve been waiting for.

Take the well rested steak and put it on your plate. Take the sauce and smother the steak with it. Don’t be shy, it’s delicious.

The creamy and light sauce goes great with the peppery crust of the steak.

Go ahead, slice into that bad boy and take a bite. I’m sure you’ll love it! 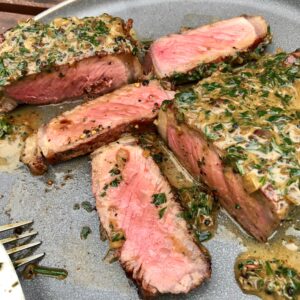 Check out the full start to finish video from my Instagram page. Printer friendly recipe is below:

This post is sponsored by Sam’s Club. Sponsored posts help support the site.

Check out the Recipe for other tasty dishes. 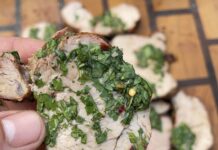 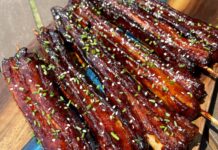 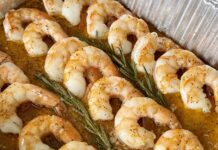 One Pan Chicken And Rice

Grilled Steaks with a Bourbon Sauce

I need to make these more often. Love a good loade

Jumping back on the @youtube train with a brand ne

The new grilling HQ is almost complete. The new co

© Copyright by grillinwithdad. All rights reserved.